Lack of sleep, being stuck at a desk, too many late nights, over-exposure to the sun, and an unbalanced diet – each of these healthy lifestyle obstacles can affect your body at the cellular level, leading to depletion of NAD+ and the symptoms of early aging.

NAD+ – nicotinamide adenine dinucleotide – is a coenzyme found in every cell. As a key coenzyme, NAD+ plays an integral role in multiple body functions, including DNA repair, cellular repair, energy production in the mitochondria, up-regulating the sirtuin proteins, gene expression, and cellular communication.* Not only do daily stresses of life contribute to the depletion of NAD+, the body’s natural level of NAD+ begins to significantly decline with age. A decreased level of NAD+ can begin to slow down vital bodily functions, resulting in many of the adverse symptoms of aging and age-related conditions.

Take 1 capsule one to two times daily, or as recommended by your health care practitioner 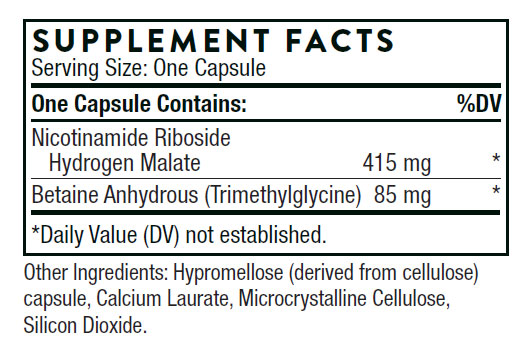 MSRP: $105.00
Now: $94.50
Was:
Elemis Cellular Recovery Skin Bliss Capsules is formulated with optimum level of antioxidant power to improve the visible signs of aging and counteract the damaging effects of everyday...
EL00269

MSRP:
Now: $48.00
Was:
Although no supplement truly has “anti-aging” properties, Thornes ResveraCel comes close because it has key ingredients that supports cellular repair, up-regulates the sirtuin proteins,...
THO00634

MSRP:
Now: $29.95
Was:
Silbinol® is a 100% natural trans-Pterostilbene extracted from the heart wood of Pterocarpus marsupium. Pterostilbene is a methylated form of resveratrol, with greater uptake and metabolic...
JF20040

MSRP:
Now: $48.00
Was:
Although no supplement truly has “anti-aging” properties, Thornes ResveraCel comes close because it has key ingredients that supports cellular repair, up-regulates the sirtuin proteins,...
THO00634